Part seven: life out of death 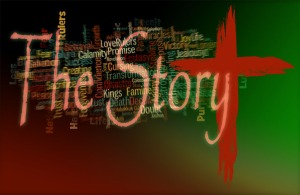 This will be my final blog in this series. After Jesus’ resurrection, which we are celebrating today, we are told how Jesus spent his time showing the disciples how the whole of the Old Testament spoke about him. For example when he met the two travelling on the road to Emmaus we read:

25 He said to them, “How foolish you are, and how slow of heart to believe all that the prophets have spoken!

26 Did not the Christ have to suffer these things and then enter his glory?”

27 And beginning with Moses and all the Prophets, he explained to them what was said in all the Scriptures concerning himself.

Another time when Jesus appeared to all the disciples we read:

44 He said to them, “This is what I told you while I was still with you: Everything must be fulfilled that is written about me in the Law of Moses, the Prophets and the Psalms.”

45 Then he opened their minds so they could understand the Scriptures.

46 He told them, “This is what is written: The Christ will suffer and rise from the dead on the third day,

47 and repentance and forgiveness of sins will be preached in his name to all nations, beginning at Jerusalem.”

What would you have given to have listened in on one of those conversations? What did Jesus say about himself covering the whole of the Old Testament (the Law of Moses, the Prophets and the Psalms)? I hope over this last week I have offered a glimpse of a few of the things Jesus might have spoken about. Like you, I eagerly await finding out.

So what about the resurrection? Are there signs of this in the Old Testament as well? Not surprisingly, yes! I will offer a few to close out this series.

If Jesus spent his final days, after the resurrection, explaining to the disciples how all the Scriptures point to him, then we might expect Peter to express some of this in his first sermon. He does. Peter quotes Psalm 16 as being a direct prophecy concerning Jesus’ resurrection:

24 But God raised him from the dead, freeing him from the agony of death, because it was impossible for death to keep its hold on him.

25 David said about him: “‘I saw the Lord always before me. Because he is at my right hand, I will not be shaken.

26 Therefore my heart is glad and my tongue rejoices; my body also will live in hope,

27 because you will not abandon me to the grave, nor will you let your Holy One see decay.

28 You have made known to me the paths of life; you will fill me with joy in your presence.’

29 “Brothers, I can tell you confidently that the patriarch David died and was buried, and his tomb is here to this day.

30 But he was a prophet and knew that God had promised him on oath that he would place one of his descendants on his throne.

31 Seeing what was ahead, he spoke of the resurrection of the Christ, that he was not abandoned to the grave, nor did his body see decay.

Peter goes on to talk about how the resurrection of Jesus is proof that God had chosen him. Before looking at that let me remind you of an Old Testament event that I am sure was on Peter’s mind.

During the desert wanderings a dispute arose as to which tribe leader should be the legitimate High Priest. They were complaining that it was Aaron (Moses’ brother). Moses, under the Lord’s leading, responded by saying that he would show, convincingly, that Aaron was God’s choice. Moses asked each of the tribal leaders to bring a dead branch and to write their names on it and to bring it to the Tent of Meeting. The Lord had promised Moses that the staff that sprouted would be his choice:

1 The Lord said to Moses,

2 “Speak to the Israelites and get twelve staffs from them, one from the leader of each of their ancestral tribes. Write the name of each man on his staff.

3 On the staff of Levi write Aaron’s name, for there must be one staff for the head of each ancestral tribe.

4 Place them in the Tent of Meeting in front of the Testimony, where I meet with you.

5 The staff belonging to the man I choose will sprout, and I will rid myself of this constant grumbling against you by the Israelites.”

8 The next day Moses entered the Tent of the Testimony and saw that Aaron’s staff, which represented the house of Levi, had not only sprouted but had budded, blossomed and produced almonds.

What’s the significance of this? God had confirmed the legitimacy of Aaron the High Priest by bringing new life out of a dead branch. Now fast forward 1500 years back to Peter’s first sermon and hear him tell the gathered Jews that they can be confident that Jesus is God’s chosen one, his chosen High Priest, because he has brought life out of death:

32 God has raised this Jesus to life, and we are all witnesses of the fact.

33 Exalted to the right hand of God, he has received from the Father the promised Holy Spirit and has poured out what you now see and hear.

34 For David did not ascend to heaven, and yet he said, “‘The Lord said to my Lord: “Sit at my right hand

35 until I make your enemies a footstool for your feet.”‘

36 “Therefore let all Israel be assured of this: God has made this Jesus, whom you crucified, both Lord and Christ.”

The dead branch that lived again and blossomed abundantly is a type of Christ’s resurrection. See types of Christ in my earlier blog. Bringing life out of death was God’s appointed method to show that Aaron was the true High Priest. Who would have thought that in years to come God would raise his own Son to life as proof that he is the true High Priest for all time? Aaron died but Jesus ever lives to intercede for you and me:

14 Therefore, since we have a great high priest who has gone through the heavens, Jesus the Son of God, let us hold firmly to the faith we profess.

15 For we do not have a high priest who is unable to sympathize with our weaknesses, but we have one who has been tempted in every way, just as we are–yet was without sin.

16 Let us then approach the throne of grace with confidence, so that we may receive mercy and find grace to help us in our time of need.

There are other ways the Old Testament prepares us for, and points us to, the resurrection. For example, in the life of David we have a very significant moment. David is fully aware of the covenant that God had made with Abraham (Genesis 12) and his share in it. In fact in David’s reign much of the promise to Abraham is being fulfilled. What takes David’s breath away, however, is that God adds something else, an additional promise, to the covenant. This kingdom of blessing spoken first to Abraham, this kingdom of blessing that God’s people are called to share in, this kingdom of blessing that will extend through the whole world is not just about earth – an earthly kingdom, an earthly blessing – but will become a heavenly kingdom and a heavenly blessing. This is a kingdom that will endure forever. This was altogether new:

16 Your house and your kingdom will endure forever before me; your throne will be established forever.

Everything of earth is dust and to dust it shall return. But God says to David that this will not be so with you and your kingdom. God is effectively saying to David, “What you are building now will go on forever. What you are achieving now will matter in eternity. You are part of something that is being worked out on earth but will end in heaven!” This is the heart of the Easter message found in the heart of the Old Testament, the promise of resurrection, a kingdom and a throne that will last forever.

This is as true for you as it was for David. Remember

20 For no matter how many promises God has made, they are “Yes” in Christ. And so through him the “Amen” is spoken by us to the glory of God.

There is so much more. Let me leave you with something to think about. The Feast of Passover (obviously!) has lots of connection with the death of Jesus. So what then about the Feast of First-Fruits? And what was on Paul’s mind when he wrote about Jesus being the first-born?:

18 And he is the head of the body, the church; he is the beginning and the firstborn from among the dead, so that in everything he might have the supremacy.

Are the Jewish feasts all about Jesus too? Surely not! I’ll leave you to answer that.

This blog is part of a series of blogs I have written for Easter 2011. You can find others in this series (once they are published) by clicking here